The BPCA catalogue of the most common public health and nuisance pests has been created to enable members of the public to make an educated choice when considering pest control.

Are you worried about wasp stings? Have you found a wasps’ nest? Learn all about wasp nest treatments in our ultimate wasp pest control guide. Get rid of wasps for good.

If you’ve spotted lots of wasps and you’re worried about getting stung, we’ve put together a guide all about Britain’s most annoying BBQ guest.

Pest controllers get thousands of call-outs to treat for wasps every year – so if you’re having wasp issues, you’re not alone!  Whether you’re thinking about doing some DIY wasp pest control, or you’re looking to enlist the help of a professional pest management company, this guide’s for you. 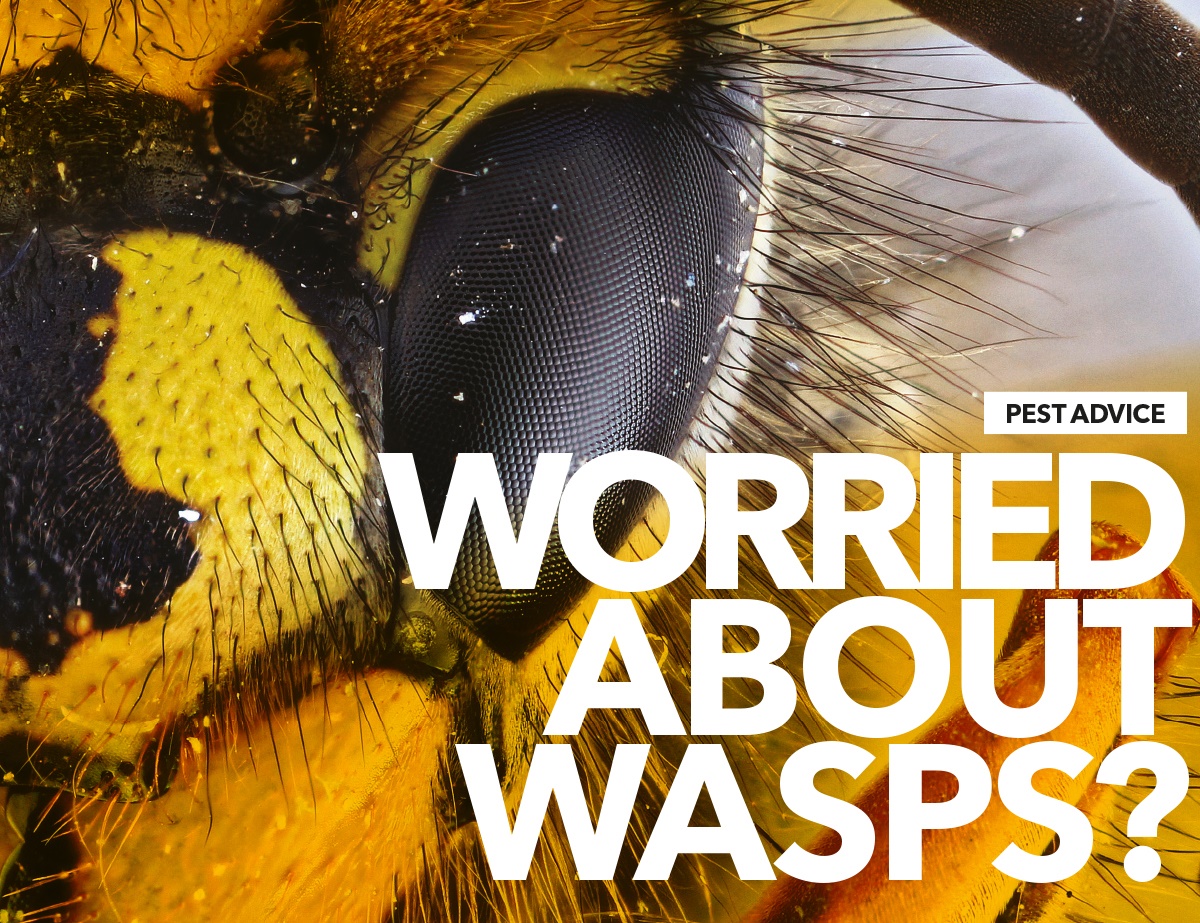 Queen wasps emerge and start working on new nests in the Spring, as the weather gets warmer. By the Summer months, wasp nests are working overtime, with up to 300 eggs being produced every day and up to 5,000 adults feeding grubs and building the nest structure.

In the UK you’re most likely to come across (Vespula vulgaris) and German Wasps (Vespula germanica). Both species are yellow and black striped, and have painful stings that can cause allergic reactions.

The dangers: why we control wasps

One of Britain’s most feared and potentially aggressive pests, wasps are known for their nasty stings and seemingly unprovoked attacks.

In reality, wasps will usually only attack a person if they feel threatened. The problem is a social wasp in distress emits a pheromone that sends nearby colony members into a defensive, stinging frenzy.

That’s right – scare a wasp and it might call for backup. 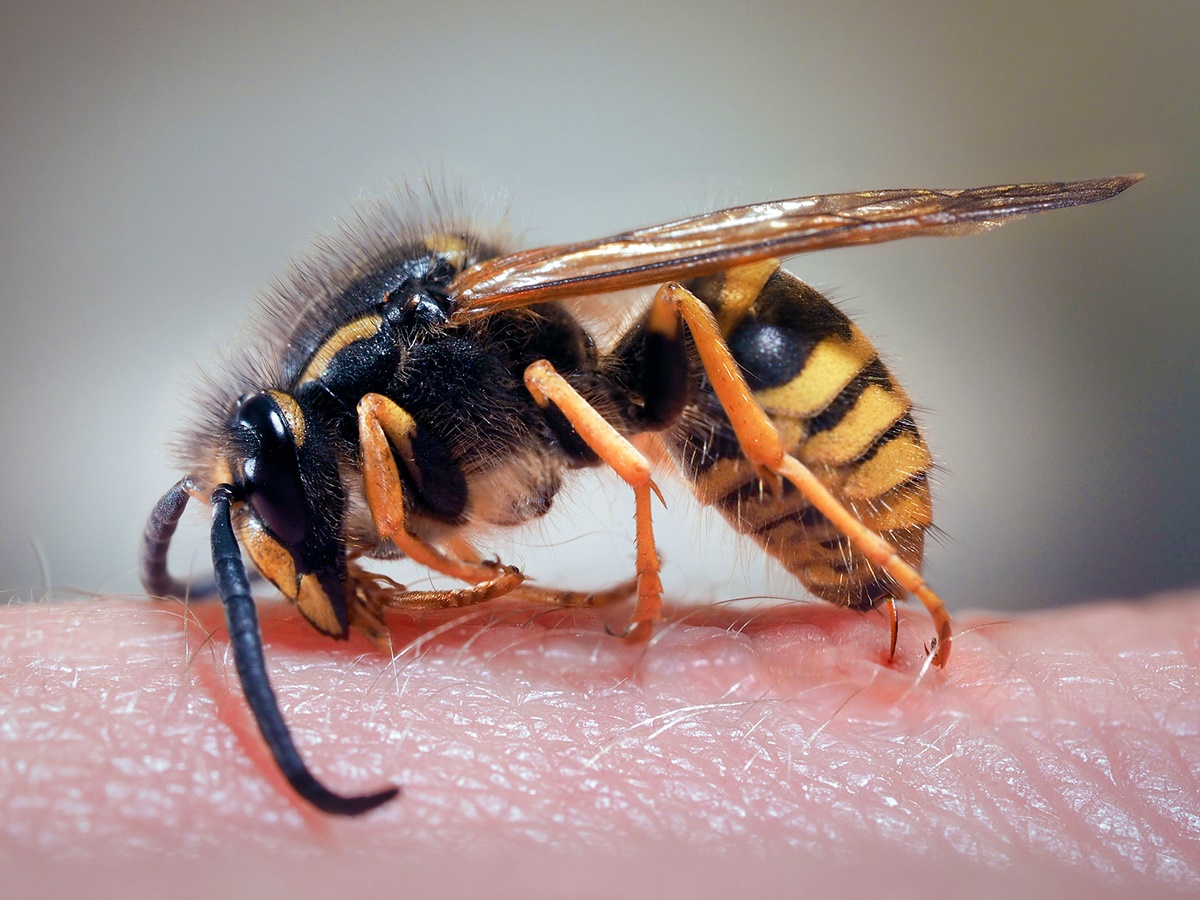 The sting of a wasp on a human hand. Note the swelling and redness.

Wasp stings are at best painful, and at worst fatal.

If you’re sensitive to wasp stings then they can send you into anaphylaxis – a severe, potentially life-threatening allergic reaction.

Anaphylaxis is a medical emergency. It can be very serious if not treated quickly. If someone has symptoms of anaphylaxis, you should call 999 for an ambulance immediately.

Children, elderly people, those with allergies, and household pets are particularly sensitive to wasp stings.

If you’re worried about a large amount of wasp activity around your home and family, you should find a professional pest controller in your area.

If after a sting you have difficulties breathing, dizziness or a swollen face – you need to seek immediate medical treatment.

If you’ve not had a severe allergic reaction, your sting will still be very painful.

To treat a sting yourself:

Avoid scratching and don’t try any daft home remedies. Vinegar and bicarbonate of soda is probably going to make it worse.

Go to your pharmacist and ask for some creams for itching and some antihistamines.

Wasps around your business

If you own a shop or restaurant you need to take wasp pest control seriously. 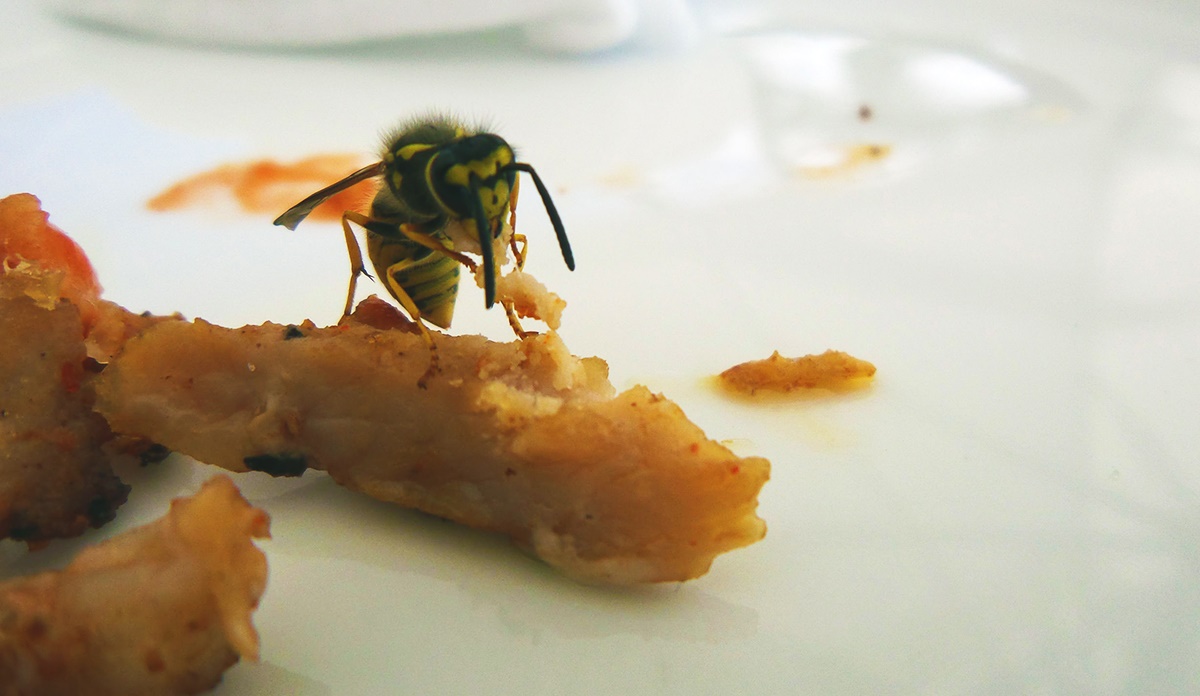 Wasps in your premise can be more than a nuisance

If your customers experience a high level of wasp activity then they’re likely to complain and request a refund or leave a negative review. Either could result in a loss of future income.

You have a duty to protect your customers and staff. To minimise the disruption to your business, we suggest you contact a professional pest controller.

Should all wasps’ nests be treated?

No. Wasps should only be treated if they pose a risk to public health and safety.

Wasps can be beneficial in gardens as they feed their grubs on caterpillars and other insects, thereby reducing these pest populations.

Where possible it is worth leaving wasp nests to continue their valuable activities. However, there can come a time when the presence of wasps is detrimental to public health

If you’re seeing a large number of wasps in and around your home or work, there’s probably a wasps’ nest or a substantial attractant nearby.

Wasp nests’ come in many different shapes and sizes. They’re amazing pieces of architecture that can contain up to 5,000 wasps during peak activity in late Summer.

They build their nest using chewed wood and saliva to make a papier mache material. The nest material is durable, lightweight and surprisingly waterproof.

Hundreds of wasps produce this papery material to build out their nest. Every wasps’ nest is both unique and shares characteristics with other colonies of the same species.

Wasp nests come in all shapes and sizes

Wasps are likely to make their nests in sheltered spots. You’re likely to find wasps’ nests:

This is by no means an exhaustive list. Pest controllers have reported finding nests in everything from toilet cisterns to brass instruments.

To work out where your wasps’ nest is, you can carefully follow worker wasps (females) back to their nest.

In early Spring, you might encounter a wasps’ nest the size of a golf ball. This would suggest it contains only the solitary queen wasp and maybe a few workers.

As the Summer goes on, a wasps’ nest can contain thousands of wasps and easily get to the size of a beachball, if left to grow.

The largest wasps’ nest ever recorded was in New Zealand and measured 3.7 m long and was probably made by German wasps (an impressive feat of German engineering if ever we heard one).

The earlier you treat a wasps’ nest, the less aggressive the colony is going to be. You can contact a pest controller in your area to get them to remove a troublesome nest.

Wasps are often confused with hornets. Hornets are rare in the UK, but if you do see one, it’s likely to be the European hornet.

Wasps are classified under the order Hymenoptera, which means “membraneous wings”. All the stinging insects belong to this group, and they are a highly evolved group of insects.

In the UK, we mainly get common wasps (Vespula vulgaris) and German wasps (Vespula germanica). All wasps have complex social structures and different ways of doing things.

They have a sweet-tooth at one end and a painful sting at the other! 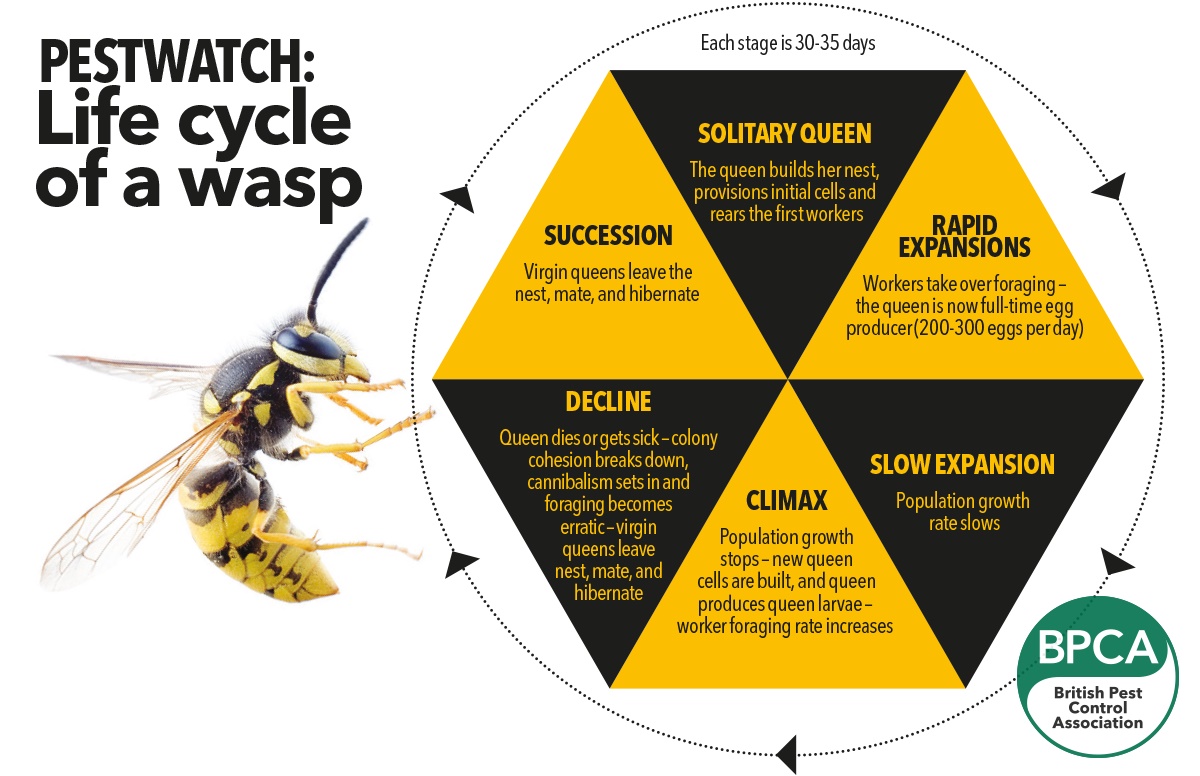 The queen wasp is larger than normal wasps (about 20mm).

She hibernates over winter, making a nest in the spring in which to lay her eggs. She feeds the grubs on insects until they develop into worker wasps, three to four weeks later.

Workers, all sterile females, forage for over a mile in search of food.

At the end of the year when the colder air arrives, and fruit starts to perish quickly, wasps start to starve or die of the cold.

The adult worker wasps start to die off, and the new queen wasps go into hibernation and emerge in the spring to initiate the process again, building completely brand new nests.

Wasps are natural pest controllers and tend to eat other insects.

At their peak in August and September with the youngsters reared, the workers turn to the sweet food they prefer and become a nuisance.

It’s really easy for you to mistake bees for wasps.

The way we treat bees and wasps are very different.

Bees are hymenoptera, specialising in flowers, eating nectar for energy and pollen for protein.

Bees of all types are essential to our ecosystems, being the highest number of pollinating insect.

An estimated third of all crops are pollination-dependent, including those used in livestock feed, covering 70 different types of crop.

If you’re unsure about whether you’re looking at bees or wasps, contact a professional pest controller and they’ll be able to help.

If possible and safe, take a photo to help with the identification.

BPCA is committed to protected bees, as is the British Beekeepers Association, Bumblebee Conservation Trust and the Tree Bee Society.

Preventing wasps and their nests

Prevention is always better than cure. There’s things you can do to stop wasps invading your home or business.

Simply keeping your home secure will stop wasps wandering into the house. Standard fly screens can help stop wasps getting in, while remaining cool in the hotter months.

Open bins will attract greedy wasps looking for a cheap, sweet meal. Keep you bins away from the house and make sure the lid is on properly.

You can check all the most likely spots of wasps each Spring when the nests are tiny and easy to deal with. They’ll be about the size of a golf ball. Check the loft, garage, shed and under eaves. 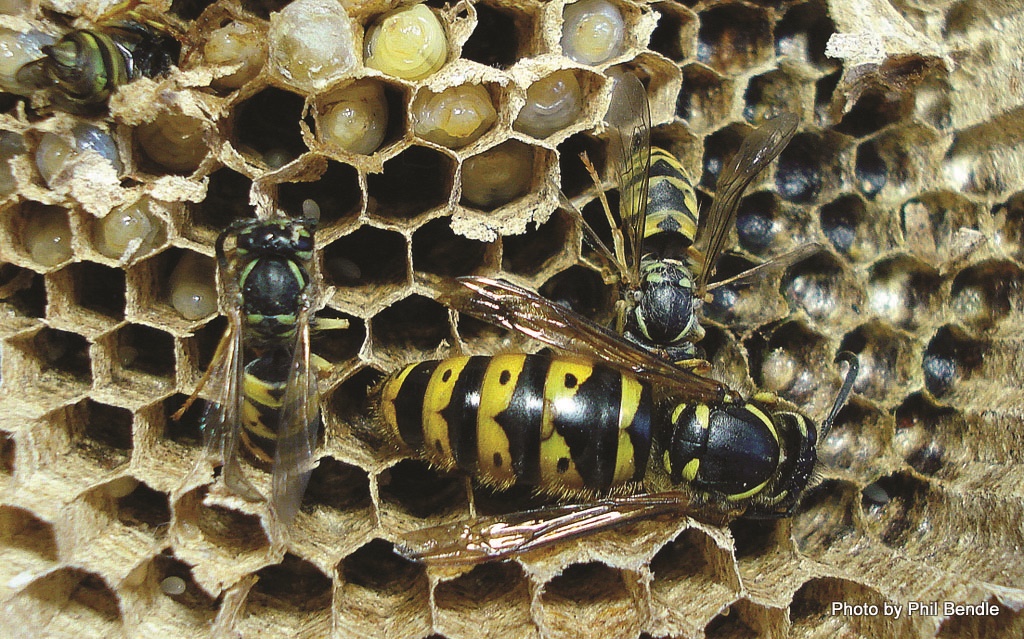 How to get rid of wasp nests

When wasps are causing a nuisance or endangering human health, we may have to destroy a wasps’ nest.

Treating a wasp nest can be very dangerous. Wasps inside the nest will feel threatened and often become aggressive. This could cause them to sting you and others as they defend their nest resulting in multiple stings. Unlike bees, wasps do not die after one sting, they can, and will, sting you quite a few times!

Remember, not every wasps’ nest needs destroying – so if it’s well away from a building in a rarely used part of the garden, you might want to just leave it alone.

Wasps abandon their nests after the Summer and won’t return to it the following year.

Professional wasp control and what to expect

To get rid of wasps you don’t need to remove the nest, but you may need to treat it.

To keep yourself and your family safe, we’d always recommend the use of a professional pest controller.

A professional pest controller has the technical knowledge and access to a range of professional use insecticides which are not available to the public.

They’ll also have the appropriate protective equipment to avoid getting a nasty sting.

A pest controller will normally apply an insecticide near the entrance of the nest. The wasps then bring the chemical into the nest. After a couple of days the wasps will die from the dose of the pesticide.

Even if you think your wasps nest is at an inaccessible height, professional pest control companies will have the tools to reach and treat the nest in the safest possible way.

You can ask your pest controller to come and remove the nest after a few days, but this will normally incur an extra charge.

Alternatively, you can wait until the Autumn or Winter when you are certain no live wasps remain and remove the nest yourself. If the nest has been treated with a pesticide we suggest you wear protective clothing and gloves.

Getting rid of wasps yourself – DIY wasp control

Although an insect spray will quickly kill any wasps you hit in flight, the sheer number of wasps per-nest means this is probably a waste of time.

You’ll see all sorts of DIY nest removal guides online. They’re all very dangerous and not recommended by us.

When wasps feel threatened they release a chemical to call for help. While being stung by one wasp isn’t normally dangerous, 30 or 40 stings could kill you.

DIY products can be effective for dealing with small nests in the early Spring, however they’re unlikely to help with a large, established nest. Professional pest controllers have access to professional use products.

NEVER attempt to deal with a wasps’ nest if you think you might be allergic to stings.

Finding a pest controller to get rid of wasps

Wasps have the potential to hurt you if their nest is disturbed. That’s why we can only recommend using a properly trained and qualified BPCA member company.

They have the expertise and equipment to do the job safely.

You can find a BPCA member, local to you, using our Find a pest controller tool.